3 Ways To Stay Fit While Watching The TV

How to stay fit while watching TV

A decade ago TV enthusiasts were stuck with basic cable or paying a premium for television from a dish such as Dish Network or DirecTv. Viewers would set reminders on their phones or make sure to be in front of the television every Wednesday at 7 pm to watch their favorite show. Those were the days. Right?

Nope. Today’s world has shifted so much from the traditional way of watching TV.  We now have streaming options such as Netflix, Amazon Prime Movies/TV, Hulu, Vudu, Sony Crackle, Tubi, Crunchyroll, and probably a hundred more.

The point of all this is each and every year the United States ranks highly on the world’s list of obese countries. Not only is it because of the lifestyle we live, but because generations have adopted technology, and let’s face it, have just gotten lazy.

Television has played a part in this as well. We all love our TV shows and don’t want to miss them, and while watching TV, you’re losing valuable time throughout the day/night to be active. Well, we have a few solutions for you on how you can stay active while enjoying your favorite TV shows.

This is actually quite genius if you think about it. If you know you’re going to sit down and watch a few episodes of your favorite tv show, grab a piece of paper and slate out a mini-workout during commercials or at the end of each episode. If you can sit on your bum for 30-45 minutes for a full episode, during the commercials, or transition to the next episode.

Also, if you’re watching regular TV, a commercial should be anywhere from 3-5 minutes, that is enough time to do 10 pushups, 10 sit-ups, and 10 jumping jacks to get your heart pumping a little bit faster. If you’re streaming on Netflix or Hulu, at the end of each episode, do the same and then write down your progress. Creating a visual way to show your progress will help give you more drive to continue staying active. 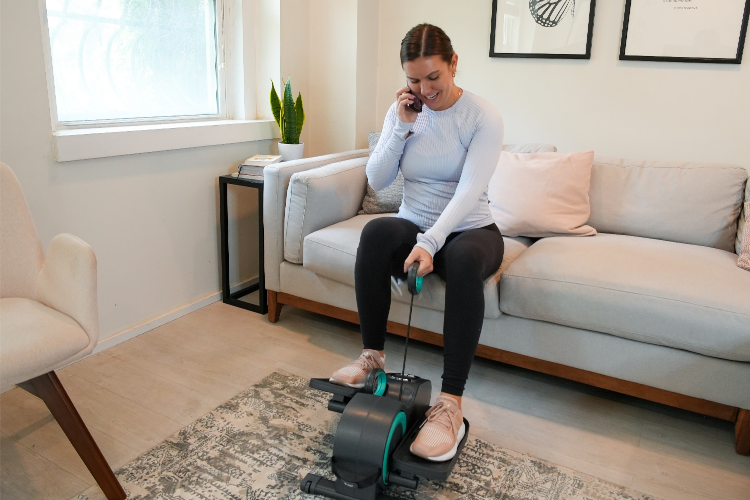 This is how you can exercise while watching TV.  It’s the brand-new seated elliptical, the Total Body+ on Indiegogo allows you to get lower body cardio movement and upper body strength training at the same time, in one compact machine! You can use it while watching TV.

Be productive before, during, and after your shows

We know that it is so easy to just let Netflix play that next episode once the first one is done, then the second, and all of a sudden you’ve sat on your couch for more than an hour and a half. We know you really want to finish that next season of your favorite show, so before starting the first episode, put a load of laundry in.

Your clothes are almost done in the dryer! Either start that third episode and wait for the dryer to beep at you, or get up before it starts and check to see if they’re dry already. If they are, pull them into a hamper and bring them in front of the TV with you.

This is called multitasking. You can watch your show and fold your clothes at the same time. Did you know? You’re actually burning calories while folding your clothes and watching the tv? Yes, yes now you know.

So, before you start hours on hours of watching your favorite television show, grab your pups’ leash and go for a walk. Really, if you walk up and down the block, it will only take you 10 minutes to do this, that’s not even a third of a Netflix episode.

5 ways to elevate your interiors with The Samsung Frame TV, available at Currys

5 ways to elevate your interiors with The Samsung Frame TV, available at Currys

The Skin Rocks App Has Landed