Traditional designs from Korea, from houses to hairpins, are reworked to create the interiors of this Manhattan restaurant by New York studio AvroKO.

AvroKo, a studio that focuses on hospitality, completed Oiji Mi, an upscale Korean dining spot in the Flatiron District – an area once home to over 100 social clubs during the Gilded Age.

AvroKO based the main dining room on a hanok, a traditional Korean home dating back to the 14th century.

Interlocking timber beams across the ceiling and walls mimic those used to construct the hanok, while gridded partitions echo the windows and screens found inside.

A wooden flooring system known as daecheong runs through the restaurant, from the bar area at the front to the open dining space behind.

Lighting is also based on the shapes and textures of Korean jewellery, and decorative hairpins called binyeo.

Among these bespoke designs are pendants suspended straight above the tables, bead-like sconces and chandeliers that arc out from a central column. 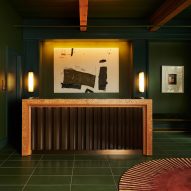 “The designers also brought in elements of dansaekhwa, or the repetition of action which is known to stabilise and restore those in its presence,” AvroKO said.

This principle is apparent in the use of textiles, such as a custom installation above the bar influenced by jogakbo, a style that uses patchwork to create flowing patterns and shapes.

Tabletops of walnut and marble accompany a palette of teal and claret across the walls and upholstery.

Mirrored and tinted metal panels under the tall ceilings make the space feel larger, and also harken back to the Gilded Age clubs.

AvroKO is behind the designs of many well-known restaurants and hotels in New York City and beyond.

The firm’s recent projects have included a members’ club in Chicago and an eatery and entertainment space in Nashville.

The photography is by Christian Harder.

The easiest way to keep plants watered while on holiday

The easiest way to keep plants watered while on holiday

Mom Will Love These Gift Ideas, No Matter Your Budget