Installed in Selfridge’s first-floor menswear department for 12 months, the topsy-turvy pop-up store is a departure from the stone displays and pared-back colour palette ordinarily associated with the Swedish streetwear label‘s retail environments.

Instead, the design team conceived the store as an upside-down office featuring all of the typical, run-of-the-mill materials and fixtures that you would expect to find in an office, such as ceiling tiles, strip lighting, corrugated metal, exposed wires, pipes and steel beams but all installed to create the impression of being upside down.

Typical polystyrene grid ceiling tiles are installed across the floor, while shiny vinyl floor tiles are used on the ceiling.

The sneakers, which include the latest season and popular carry-over footwear silhouettes, are injected with magnets and stuck to the wall while customer’s receipts are dispensed from behind a set of elevator doors that open at the touch of a button.

“The concept was to flip the script both physically and figuratively on what customers expect from a pop-up, turning all elements upside down through an industrial office lens in which the ceiling becomes the floor and vice versa,” said the brand, calling the pop-up its most “ambitious and boundary-pushing” to date. 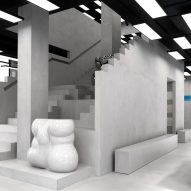 The endeavour was facilitated by British footwear retailer, Kurt Geiger, who provides the footwear offer for Selfridges.

The store is a continuation of the brand’s co-founder and creative director Max Svärdh’s mission to disrupt the traditional retail module. A digitally native business, Axel Arigato began its life online in 2014, opening its first physical store in London’s Soho in 2016.

From the beginning, the brand elevated the status of its products to art by displaying them on plinths in the centre of the store like pieces of sculpture. The concept was in contrast to other sneaker brands at the time, which typically displayed as many shoes as possible across shop walls.

The brand’s permanent stores are also distinguished by the use of monolithic blocks of stone. In Paris, goods are displayed on blocks of travertine, concrete in Copenhagen and terrazzo in London.

The photography is courtesy of Axel Arigato.

Cocktail bar “suspended between sea and sky” draws upon nearby ocean

5 Hacks for Pulling Off The Ultimate 4th Of July Party