Bare brick and concrete are exposed in this renovation of a grand hotel at the foot of Mont Blanc by French architecture practice Bachmann Associés.

Set in the ski resort of Chamonix, La Folie Douce Hôtel Chamonix occupies the former Savoy Palace – an 18,000-square-metre Belle Époque building with 250 rooms and five restaurants that was originally constructed in 1904.

In the 1920s, the hotel hosted lavish balls and tennis tournaments. But it later fell into disrepair and was abandoned by French travel operator Club Med in 2018 after it stated that “the site simply no longer meets our criteria“.

Commissioned by the hotel’s new operators – hotel groups La Folie Douce and Les Hôtels Très Particuliers – Bachmann Associés wanted to reconnect the hotel with its opulent heritage and create spaces that would appeal to an “eclectic clientele”.

The Dinard-based studio, founded by architects Christophe Bachmann and Jérôme Gesret, left many of the hotel’s walls and ceilings intentionally rough, using lighting to accentuate any cracks and uneven textures.

In the public areas, dark and intimate spaces are alternated with generous light-filled rooms blessed with expansive Alpine views.

In the lobby, partitions and false ceilings were stripped out to create a grand atrium with a sweeping staircase and a series of contemporary suspension lights that replace the hotel’s old-fashioned chandeliers.

On the first floor, a cocktail lounge called Le Janssen is anchored by a brass-fronted bar and surrounded by arched floor-to-ceiling windows. 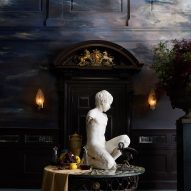 “For this project, we had an exciting playground,” Gesret and Bachmann explained. “It was demanding because we had to bring an old palace back to life by completely reinventing the codes of the classic hotel industry. But that is really what appealed to us.”

“We really like to shake up and reinvent places and we had a lot of fun exploiting the volumes, imagining spaces of freedom and conviviality in the very spirit of La Folie Douce.”

With a similar aim, Snøhetta recently updated another Belle Époque hotel set in a tiny mountain village in Norway, while Roman and Williams converted a historic London police station into the first international outpost from American hospitality chain NoMad.

The photography is by Gaelle Le Boulicaut.

The Positivity and Gratitude Journal: Invest a few minutes a day to develop gratitude, thankfulness, and positivity

5 Amazing Reasons to Plant Comfrey in Your Garden