London practice Child Studio has created an “intimate and domestic atmosphere” inside this store by local eyewear brand Cubitts, which occupies a townhouse in Belgravia.

Taking over the building’s basement and ground floor, the shop was designed to draw on both the modernist aesthetic of Cubitts‘ frames and the history of Belgravia.

The central London neighbourhood was first established in the 1830s in line with plans by Georgian master builder Thomas Cubitt, who also gave the eyewear brand its name.

“It was important for us to build a layered narrative for this project and to connect the townhouse architecture with the modernist ethos of the brand,” said Child Studio founders Alexy Kos and Che Huang.

The studio reinstated many of the building’s Georgian design features, which had disappeared over years of renovation works.

The original wooden floorboards were uncovered and restored, while the walls were painted a chalky yellow hue that was typical of the period.

Most of the doorways were either extended to reach three metres in height or adorned with ornate architraves that complement the interior’s wall mouldings and cornices.

In the store’s front room, the studio installed a cast iron fireplace that is meant to foster an “intimate and domestic atmosphere”.

“We imagined a contemporary interpretation of a classic drawing room – an elegant living room where guests may be welcomed and entertained,” explained the studio.

“We were particularly inspired by the pioneering designer Eileen Gray, who lived in this part of London in the early years of her career in the 1900s.” 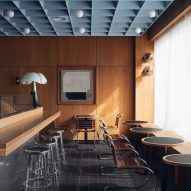 On the other side of the space is a custom concertina display stand that’s meant to resemble a traditional room divider.

This stand is lined with creamy linen-like wallpaper while another stand at the rear of the store was crafted from mahogany and finished with brass edging.

Other homely design features like mirrors and upholstered armchairs were dotted throughout the store as decoration.

There are also a number of antique light fixtures including Gray’s domed Jumo lamp and a golden leaf-shaped desk light by 1970s Italian designer Tommaso Barbi.

Child Studio has designed several of Cubitts’ eyewear stores across the UK.

Among them is a branch in Leeds that takes cues from different design periods through history and an outpost in London’s Soho, which draws inspiration from the neighbourhood’s infamous sex shops.

The photography is by Felix Speller.

The Role of Google, Facebook, and Yelp Reviews in the Era of Healthcare Consumerism

The Role of Google, Facebook, and Yelp Reviews in the Era of Healthcare Consumerism