As part of Stockholm Design Week, Swedish design firm Form Us With Love has opened the doors to its new studio space featuring modular furniture informed by pegboard walls.

Perforated steel units are dotted throughout Form Us With Love‘s (FUWL) Stockholm studio, which is housed in a former travel agency.

“We’ve been dealing with this space for a good year and a half, and thinking about it for a good ten years,” FUWL co-founder John Löfgren told Dezeen.

“It’s definitely a place that is a catalyst for what we’re doing – and we’re doing quite a lot of different things, so we need a really flexible space and we need a mobile space,” he added. “We tried to be smart about how you store things and logistics in general, really being economical with each square metre.”

The 200-square metre studio space, which was created in collaboration with architecture studio Förstberg Ling and branding studio Figur, was designed to suit the needs of the FUWL team.

Large floor-to-ceiling hangar doors hide an office area, workshop and kitchen while allowing the front of the studio to be sectioned off from the remainder of the space.

This allows the area to be used as an exhibition space, where FUWL is displaying some of its ongoing projects during Stockholm Design Week.

Among these is a project that explores how toxic glass – a waste material from the glass industry – can be treated to separate the toxins from the glass.

Five low, wheeled cabinets made from perforated steel were used to display the projects.

These are just some of the storage units and room dividers that FUWL has made for the studio, drawing on materials found in its own workshop.

“We have these boxes that were derived from the workshop, like ones you would have in the garage,” Löfgren said.

“We started wondering what would happen if we move these things out in the open,” he added. “It started off as dividers and walls, but add some wheels and all of a sudden we are in the open space.” 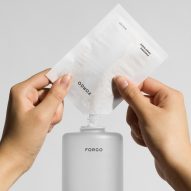 The studio is currently using the modular units as a material library, a tool wall and storage for personal and studio use, as well as experimenting with new functionalities.

Produced by Tunnplåt – a company that normally supplies lockers to schools, gyms and other public-sector interiors – the containers have a pattern of symmetrical holes.

This was designed to make the reference to pegboard walls immediately recognisable.

“We definitely experimented with patterns,” Löfgren said. “We still wanted people to have a smile on their face like: I can see where it derives from.”

Realising that the perforated steel units could be used to create a flexible interior was just a coincidence, Löfgren said.

“I think it’s definitely a tool that incorporates how we want to work in the interior,” he said. “And I think that’s just been a coincidence.”

“We were always looking for something that would help us have this kind of full flexibility, and still be able to do something both fun and functional,” he added.

In the future, the studio said it might also create the units in other colours. For its own office, soft grey tones were chosen to aid concentration.

“We worked with tones of grey as a backdrop throughout the space to put focus on the creative processes taking place within,” architecture studio Förstberg Ling said.

Form Us With Love has previously launched products such as Forgo, a soap designed to minimise carbon emissions and an IKEA chair made from recycled wood.

The photography is by Jonas Lindström Studio.

Form Us With Love’s studio is open to the public between 5 September and 9 September 2022 as part of  Stockholm Design Week. See Dezeen Events Guide for an up-to-date list of architecture and design events taking place around the world.

Bundle up in Style- Plus Size Outerwear from Rebdolls!