Architecture studio Konishi Gaffney has overhauled a 1950s garage in an affluent Edinburgh suburb, adding a rhythmic facade made up of wooden battens.

The Scottish studio was challenged with turning the existing concrete garage into a functional artist’s studio, while being sensitive to the existing Georgian property in The Grange.

Konishi Gaffney devised a scheme that involved filling in the existing garage door, raising the structure’s roof to match the height of the house’s ground floor and incorporating the property’s side gate into the facade.

These changes unified the structure’s appearance from the road creating a sense of contemporary “civic grandeur”, as well as facilitating secure side access to the back garden.

“As a practice we’ve been exploring ways of expressing the structure of cladding in projects,” said Konishi Gaffney.

“We started by setting up the vertical timber battens and horizontal cladding in a rhythm of fins across the facade.”

Timber was selected for its affordability, sustainability and its capacity to weather appealingly.

The battens were carefully orientated to allow water to drain off them and prevent water from pooling, as well as to catch light and form interesting shadows across the facade. 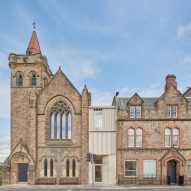 The existing structure was insulated and the walls and ceiling punctuated by two aluminium clad windows and a skylight, providing the studio space with ample natural light for the artist to work in during all seasons.

The creative function of the structure’s interior is referenced in the facade, which was intended to read “like a musical score,” and “continue beyond, separated from the house, like a stage-front.” according to the architects.

The wooden composition of the frontage continues on into the garage’s interior, which has a ceiling clad in dark stained wood with protruding beams.

Other garage-related projects featured on Dezeen include an orange-painted timber-framed garage extension by McCloy + Muchemwa and a garage in Amsterdam that was transformed into a family home by Barde + VanVoltt.

The photography is by ZAC and ZAC.

3 Ways To Stay Fit While Watching The TV