Spanish design agency Masquespacio has created the interior of the first Mango Teen shop in Barcelona, which was informed by the metaverse and aims to provide an interactive and dream-like shopping experience.

Designed for customers aged 11 to 13, Masquespacio used graphic shapes to outline clothing displays and a colour palette of oranges and greens for the fashion shop interior.

“The new Mango Teen store is established as a world of dreams with its different perspectives and different incoherent elements, just like when we are dreaming,” said Masquespacio.

“In this place, the dreams are made reality through the design elements that play with your mind and invite the user to interact with the objects surrounding them, bringing the metaverse world to reality.”

Masquespacio created the design elements in the shop interior to showcase as much clothing as possible, while also functioning as attraction points that provide a unique shopping experience.

At the entrance is a “futuristic” arched tunnel with strip lighting designed to guide customers inside. Shelving displays on the shop floor feature tiled surfaces and metal step ladders that mimic swimming pools.

The shop front and interior are divided by a bold colour choice of green and orange.

“At the initial point, we chose a lighter and more pinkish palette, but as this is getting a bit outdated, we decided to play with two colours that are not so explored and combined them,” Masquespacio co-founder Christophe Penasse told Dezeen. 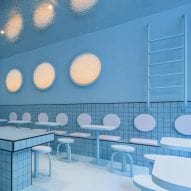 The order counter was designed to be reminiscent of a hotel reception and the store also features a clothes-recycling drop-off point that looks like a washing machine, which releases bubbles when customers open the door.

The futuristic tunnel, swimming pool, hotel reception and washing machine elements are intended by the studio to “invite the teens to enter a universe in which a new use is given to the objects, giving them the opportunity to let their imagination flow and use the space how they dream about it.”

“We searched to convert the design elements to an attraction point for the teens’ TikTok life, but at the same time create them as elements that have a function, such as an order bar or an exhibition point like the swimming pool and tunnel,” Penasse said.

The shop’s changing rooms further encourage interaction with the digital world. Integrated phone holders and ring lights make it easy for customers to take photos for social media, while the reflective walls and ceiling create a futuristic backdrop.

As the first Mango Teen shop to open in Barcelona, Masquespacio’s design aims to create a distinct brand identity.

The fashion brand had previously launched pop-up shops, from which they identified colourful interiors and places to take photos and videos as main points of interest for teenage shoppers.

Other projects by the studio include a burger joint designed to look like a swimming pool and a greek restaurant informed by ancient ruins.

The photography is by Luis Beltran.

Ten eclectic eateries that showcase the potential of terrazzo

Ten eclectic eateries that showcase the potential of terrazzo

Lynsey Queen of Clean’s hack to stop condensation on windows