Nestled among a parade of high-end shops in Marylebone, MONC sells glasses made from bio-acetate – an acetate produced completely without fossil fuels – which are packaged using recycled leather cases and compostable cornstarch foam.

When local studio Nina + Co was brought in to design MONC’s debut store, the team was keen to incorporate biomaterials throughout the interior, while also taking the brand’s short-term lease of the retail unit into account.

“Circularity was key,” said the studio. “Almost everything we brought into that building was entirely bio-based or recycled.”

“The furniture is expertly built to last but can be disassembled for re-use, recycling or return to the earth as nourishment.”

Upon entering the store, visitors find themselves under an undulating ceiling installation crafted from corrugated panels of cornstarch foam.

Thicker blocks of the material were used to create rows of squishy-looking shelves, which can be used for packaging or simply dissolved in water when they eventually start to show signs of wear and tear.

Display plinths made out of mycelium – the vegetative part of a fungus – were dotted across the store to showcase different eyewear models.

In between the shelves, a couple of long mirrors are balanced on hunks of concrete that were salvaged from roadworks nearby.

The craggy concrete was chosen as a subtle nod to the rugged Dolomite mountains, which can be seen from the Italian town where all MONC eyewear is produced. 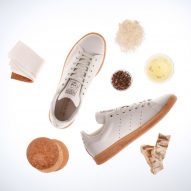 As both furniture pieces were joined with mechanical bolts rather than glues, they can easily be taken apart, flat packed and transported to a different MONC store for reuse.

Walls throughout the interior were finished with VOC-free clay paint while the unit’s existing floor was covered with a water-based sealant.

“Previous tenants had ripped up their floor to leave a plywood subfloor, with markings of the adhesive still evident and some paint bucket outlines,” the studio explained.

“After a test patch, we were convinced that a simple water-based sealant would give it a beautiful depth and sheen with the industrial feel of concrete [while being] kinder to the planet and the budget.”

MONC is one of five projects shortlisted in the small retail interior category of this year’s Dezeen Awards.

It’s going head-to-head with the Durat showroom by Linda Bergroth, which is decked out in an unusual mix of colours, and Aesop’s Yorkville store by Odami with its oxblood-red balusters.

The photography is by Handover.

The Best Area Rugs That Put the Spotlight on Your Floors