French architect and designer Philippe Starck used warm tones and modernist references in his renovation of Villa W, a boutique wellness hotel on the coast of Saint-Tropez.

Created as a little sister to the existing Starck-designed Lily of the Valley hotel which is located nearby, Villa W is a fitness and wellness hotel located in an existing villa that was renovated by Starck.

The 1,559-square-metre villa, which is situated on the southwestern corner of the peninsula in the French Riviera town, was designed as “a romantic hideaway” where guests can relax as well as work on their fitness and health.

“We’ve all dreamed of a little cabin, chalet or fisherman’s hut by the sea,” Philippe Starck said. “We don’t have to dream anymore, because we’ve made that dream a reality – a romantic hideaway nestled in a pine forest that looks down onto the Mediterranean at La Croix-Valmer.”

Set over two floors, the boutique hotel has three double rooms and can cater to up to six guests at a time. Each bedroom has its own private terrace with views of the surrounding lush landscape and the Mediterranean sea.

During the renovation process, Starck decided to emphasise the original architectural features of the villa. It was built in the 1960s by a local architect called Jean Nielly.

Made from vast sheets of glass, concrete and steel, the villa already had unparalleled views onto its surroundings. In a bid to celebrate this, Starck focused on drawing attention to the length of the villa, adding arbours made from chestnut wood along its long, south-facing glass facade.

Large French doors set in aluminium frames allow plenty of natural light to brighten up the interiors and merge them with the exterior, while a decked terrace that wraps around the edges of the building has a private 17-metre-long pool.

“Villa W boasts views that have remained unchanged for hundreds of years,” said owner of Lily of the Valley Lucie Weill. “So, when we were designing it, we felt it was essential to keep this unique, panoramic view of the Mediterranean.”

“That’s why we placed so much importance on the length of the villa so that guests would be able to see the sea from every room,” Weill told Dezeen.

“The effect is quite something: instead of feeling like a building nestled against the hillside, Villa W feels more like a boat moored on the coast.” 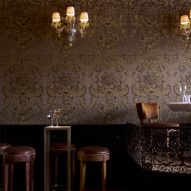 Guests enter the hotel through a main lobby and reception area where tan leather sofas, wooden ornaments and rust-coloured rugs can be found.

Off to one side of the lobby is the terrace area with rattan seating, while a bar at the back of the space serves what the hotel calls “a healthy Mediterranean gastronomy.”

Extra touches of warmth are provided by the wooden flooring and soft furnishings.

The warm colour palette is continued upstairs in the hotel’s bedrooms where vintage items sourced by Starck, such as a brown Egg Chair by Arne Jacobsen for Fritz Hansen and wooden Walnut Stools designed by Charles and Ray Eames, can be found.

The three bathrooms have a cleaner, lighter aesthetic with marble floors and floor-to-ceiling mirrors, which the designer incorporated to emphasise the omnipresence of the Mediterranean.

Starck is one of the most prolific designers in the world. Although is best known for his product designs such as the Icon Chair and Juicy Salif citrus squeezer, he has also produced a number of notable interior projects.

These include renovating the interior of the Quadri restaurant in Venice. Earlier this year, he led the art direction for Villa M, a hotel in Paris covered in plants.

Photography is by Novembre Studio.

"Homes manifest mechanisms of power via relationships of gender, class and age"

What to Know About the Marburg Virus Disease

What to Know About the Marburg Virus Disease