New York studio Rockwell Group has mixed references to traditional Japanese crafts and the work of Catalan architect Antonio Gaudi in its interior design for this hotel in Barcelona by American hospitality brand Nobu.

Located in the former Gran Hotel Torre de Catalunya near Barcelona’s main train station, the 250-room hotel is topped with a Nobu sushi restaurant on the 23rd floor as well as incorporating a pool, spa, meeting rooms and event spaces.

The Spanish outpost marks the thirteenth hotel opening from Nobu, which started as an upscale Japanese fusion eatery in New York in 1994 but quickly expanded into a celebrated chain of restaurants and hotels spanning five continents.

Architecture and design firm Rockwell Group has worked with the hospitality chain for almost 30 years, designing its first location in Manhattan followed by another 25 restaurants and eight hotels.

In Barcelona, Nobu sought to create a location that blends the best design features of its restaurants with nods to the city’s architectural heritage.

In response, Rockwell Group created a “collage of materials, textures and spaces” within the hotel, paying homage to the colourful mosaics in Gaudi‘s Park Güell as well as the traditional Japanese craft of kintsugi, which involves mending broken pottery using metallic lacquers.

“We envision the environment as an abstract landscape, in which every element and detail is crafted in an unusual and unexpected way, much like Nobu’s cuisine,” added the firm’s partner Greg Keffer.

From the street, the hotel’s entrance is framed by tall bamboo trees set behind a wall of rammed earth.

A bright orange woven screen designed to evoke Japanese Shinto gates wraps the entry vestibule and continues inside to create a connection between the hotel’s interior and exterior.

The screen leads guests into a double-height lobby lined with textured limestone and wood. The space is anchored by a dramatic brushstroke artwork – a recurring feature in Nobu’s interiors – that hangs behind the check-in desk.

Off to the side, a grand spiral staircase connects all of the hotel’s public areas including the ballroom, lobby and meeting rooms.

In the lobby bar, a monumental stone counter is lined in pale gridded wood reminiscent of traditional Japanese joinery, while a pair of central columns is clad in cracked stone with gold-coloured infill in a reference to the kintsugi mending technique.

The lounge is framed by a gridded wooden structure similar to the one found in the bar. But here, it is stained a deep indigo blue. 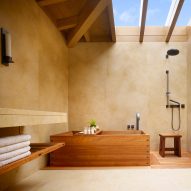 In the guest rooms, Rockwell Studio combined millwork pieces with leather and bronze-coloured detailing, while slabs of stone and travertine with bronze inlays feature in the bathrooms alongside frameless glass-panelled showers.

A moodier atmosphere reigns in the suites, where sofas sit on plinths and millwork is finished in saturated lacquer colours. The presidential suite is organised around a sculptural Japanese tea hearth made of roughly carved stone.

Bathrooms in the suites also include a traditional ofuro soaking tub, which is separated from the shower by screens clad in ceramic tiles.

The hotel’s meeting rooms feature views down into the lobby for a casual, connected feel, while sliding wood panels can be used for conjoining or separating different spaces.

A Nobu sushi restaurant sits at the top of the building with panoramic views of the Catalan capital. Its kintsugi-influenced ceiling consists of live-edge walnut panels intersected by gold-coloured veins.

Over the backlit onyx bar, a cracked blue ceramic ceiling complements columns clad in kintsugi sculptures made from blue and white ceramics.

Nobu opened its first hotel in Malibu in 2017, with the aim of bringing the atmosphere of a traditional Japanese inn to the coast of California.

Since then, Nobu Hotels has opened 12 more outposts including a beachside resort in Mexico made from locally sourced stone.

The photography is by Ricardo Labougle unless otherwise stated.

Think About This: The Benefits of Ashwagandha for Brain Health